We have such sights to show you!

This  episode of Coffee Chat of Horrors I speak to you about my top favourite films on Shudder. I really think you all need to see these movies before you die lol. **Disclaimer** I am in no way affiliated with Shudder I just love their streaming platform.  If you would like to be apart of a Live taping of Coffee Chat   of Horror’s where you get to ask the interviewee questions please make   sure  to check out my Twitch every Sunday at 9:30 am mountain time.

Written by Max Brallier & Matthew McArdle directed by Joe Begos this film is about A group of old war veterans put their lives on the line to defend a young woman taking shelter in their local VFW post, who’s running from a deranged drug dealer and his relentless army of drug addled punks.

I really enjoyed this film Grindhouse meets Expendables. It has a great cast of actors and 80’s style gore. The story line keeps you intrigued and the action keeps you in your seat. This type of film is pretty rare among the type of movies in this now era. If you enjoyed films such as Dusk Till Dawn, Planet Terror or Machete type films you will enjoy this one.

Written & Directed by Glenn Danzig and if you are a fan of Danzig or even Glenn himself you will be one fun filled titty joy ride of madness. This is a horror anthology that compiles stories from Danzig’s line of comic books of the same name. Stories which focus on horror content that’s often sexual and violent in nature, usually featuring scantily-clad female protagonists.

Director Panos Cosmatos This is a film about The enchanted lives of a couple in a secluded forest are brutally shattered by a nightmarish hippie cult and their demon-biker henchmen, propelling a man into a spiralling, surreal rampage of vengeance.

I will say that this film is NOT for everyone. If you enjoy lots of colours and strange imagery then this is a film for you. It is like a acid trip without the acid. I really enjoyed seeing Nicolas Cage in this type of character. A love story with chainsaws, crazy weapons and blood. The soundtrack for this film is awesome rock n roll.

The Cleansing Hour is Directed by Damien LeVeck the plot: Another successful “exorcism” streamed online – or so it seems. Can the “exorcist”, producer and their team bring the ratings up? Ratings skyrocket, when a real demon gets involved.

The spawn and I really enjoyed this film. Being a content creator myself I understand the fight for staying on top and how we look at social media. The film starts off slow but then descends into the fun darkness of possession. The acting is pretty good and well special effects are on point.

Writer & Director John Gilling The Story goes like this: In 1828 Scotland, Edinburgh surgeon Dr. Knox does medical research on cadavers he buys from murderers Burke and Hare, without questioning the unethical procurement methods.

A fine British horror film but eerily true, accounting the original body-snatchers Burke & Hare who resorted to murder after running out of fresh corpses for Dr Thomas Knox in Scotland. A lovely black and white film that does not fail to impress.

Rawhead Rex Written by: Clive Barker Directed by George Pavlou plot goes a little something like this: An ancient creature called Rawhead is awakened from its slumber near an Irish village and goes on a rampage killing anyone in sight.

If you enjoyed the cheesy 80’s horror films as much as I do you will be highly entertained by this monster film. There is enough gore to satisfy the gore whore in anyone and the practical effects are fun. There is also a short story that you can get into.

Written & Director Clive Barker. The story is of A troubled young man is drawn to a mythical place called Midian where a variety of friendly monsters are hiding from humanity. Meanwhile, a sadistic serial killer is looking for a patsy.

A really great Monster movie that is underrated. If you enjoy creature features or monster films then you will enjoy this tale. The special effects, makeup and costumes are gorgeous and grotesque. The story itself keeps you in your seat.

One of my favourite giallo films is done by Dario Argento which means number 3 on this list is Tenebrae. Written & Directed by Dario Argento Plot goes: An American writer in Rome is stalked by a serial killer bent on harassing him while killing all people associated with his work on his latest book.

A leather gloved killer with a great score! The music in the film is great and the kills are perfect. This movie keeps in its grips with twists and turns and finishes in a way you would not expect.

This film a great Horror Comedy that does not disappoint. The lead ladies in the film are sexy, funny and ferocious. This film pays a lot of homage to Re-Animator franchise one of my favourites!! There is gore, laughs & twists that will not disappoint so if you have yet to see this film go out now and watch it!!!

#1 The Queen of Black Magic

Plot: Families were terrorized at the orphanage. Someone wants them dead, apparently with black magic that is very deadly. She has a grudge and she was also born because of the sins of the orphans who formed her into the Queen of Black Magic.

My spawn started out watching this film with me and by the middle section of the film she was gone. I laughed as she was unable to handle some of the body gore that this film had. If you know my spawn you know she is not too squeamish. I personally loved the story/folktale Joko told. From the beginning it kept me attached to the film. Practical Effects sprinkled with CGI were great. If you are easily squeamish I do not recommend this film. If you would like to see a non spoiler review check out my Youtube Channel and in the links below.

Coffee Chat of Horrors
Are you a Filmmaker, Author or Host in the Horror Industry? I would love to sit down to chat with you! Coffee Chat of Horror is a Live broadcast that we do every Sunday at 9:30 a.m. mnt time. If you would like more information on CCoH or to become a guest please feel free to contact me biz@reanimateher.com or check out the CCoH Page. My Twitter handle is @ReAnimateHer_

ReAnimateHer is a Horror Content Creator who is crazy about all things horror! You can catch her live streams over on Twitch  & Youtube. Make sure to stalk us on Twitter @ReAnimateHer_

Want to grab yourself some exclusive content & perks? Then why not check out RAH’s Patreon 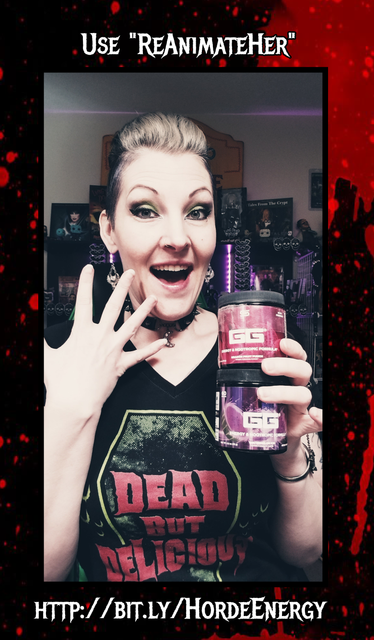 Reminder to vote daily for FREE!!

We advanced to the top 10 of Face of Horror! Please continue to vote daily.

We advanced to the top 10 of Face of Horror! Pleas

Ghouls we are LIVE with #Tarot Tuesday! 🕸 LIVE

Good Day Ghouls! Today's looks is brought to you b

Can you tell I love my skulls? I have many skulls

This was one of my favourite cosplay's to do. When

Can not wait for more in the X Universe #horrorbab

Don't forget to VOTE for me today! We are in SECON

Do you have #tiktok do you enjoy Horroe Discussion

@evildeadthegame loving Mia and her kills! These s